Earlier this year, we launched a limited beta of Venmo Touch, which allows consumers to pay in all their favorite mobile apps by just tapping a button instead of re-entering credit card details over and over again for each app.  We’ve received fantastic feedback from users of Venmo Touch - both consumers and merchants.  While we limited beta participation to only a handful of mobile apps, our feedback on the consumer experience is on the order of millions of devices and consumers.  During this time, we’ve also grown our mobile volume to more than $2 billion annually and our enablement of one touch purchasing to more than 40 million consumers.  Given all the positive feedback, we’re now making Venmo Touch available to all Braintree merchants in the US. We are also partnering with Branding Brand, the mobile app provider to many of the world's leading retailers, including American Eagle Outfitters, Costco, Crate & Barrel, Ralph Lauren, Sephora and many others to make it even easier for top retailers to include Venmo Touch in their mobile experiences.

Along with the broad release of Venmo Touch (now version 2.0.0), we’re also announcing a more comprehensive Braintree iOS SDK.  Braintree was the first in the payments industry to provide developers with tools to easily accept payments in native mobile apps more than a year ago.  While Venmo Touch solves one of the biggest challenges that we’ve seen app makers face, getting payment information from a user the first time, we’ve also seen that there are smaller challenges that need to be solved as well.  For example, merchants who did not already have a native checkout flow found it could be a lot of work to build the UI used to collect credit card information manually from users who did not yet have a card saved with Venmo Touch.

To ease that pain, the new Braintree iOS SDK now includes a payment form, which provides all of the credit card entry UI, helpful hint text and card images, comprehensive client side validation that helps users catch mistyped information, and Client Side Encryption to securely transmit sensitive data in a PCI compliant fashion. 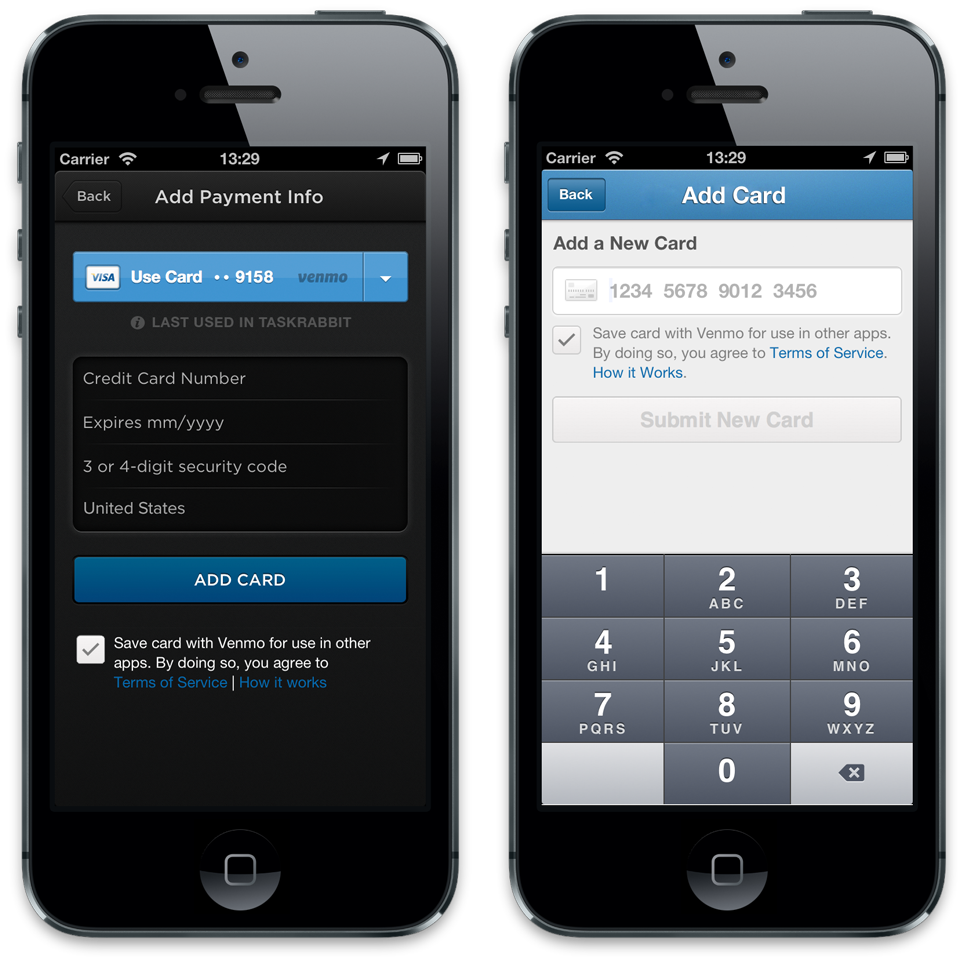 We found that abstracting all of this additional functionality into a comprehensive Braintree iOS SDK has actually reduced the integration time, and now going from nothing to accepting credit cards and enabling Venmo Touch in your app literally takes just a few hours.

Now that we've streamlined the integration experience on iOS, we're working on Venmo Touch for Android and a Braintree Android SDK--expect to see these launch soon.  As always, we're looking for exceptional engineers to join us, so if you are an Android, iOS, or backend engineer excited about Venmo Touch or the Braintree mobile SDKs, email us: jobs+touch@venmo.com.

You can find the Braintree iOS SDK (including Venmo Touch 2.0.0) at https://www.braintreepayments.com/docs/ios or at https://touch.venmo.com/docs/.

***
Aunkur Arya Aunkur is GM for Braintree’s Mobile business, leading all efforts across the mobile ecosystem. Arya came to Braintree from Google via the acquisition of AdMob. More posts by this author