The Hack Code of Conduct

A little more than a year ago we launched the Hack Code of Conduct, which is a document outlining the rules and norms of a hackathon in order to guarantee a harassment-free experience for everyone.

It’s been a year since its release and we’ve gotten a lot of positive feedback. It’s been an eye-opening experience to see how many people (including myself) have come to grips with the concept of a code of conduct as a necessity, not just an option, at an event.

The HackCoC was written to fulfill a need we encountered running our global hackathon series, BattleHack. When we were asked by a participant about the existence of one; my initial response was not much different than most of us who’ve been running events for a while:

“Why would we need a code of conduct? We never have any issues!”

After some consultation with my colleagues at Braintree and Geeks of London, we realised something important -- the fact that we never had any reported issues didn’t mean they’d never occurred, or wouldn’t in the future. Addressing this void was important to our attendees, to us as organisers, and to the wider tech community. Armed with this purpose, I set out to find a suitable code of conduct for BattleHack.

Sadly, there was a real lack of any off-the-shelf codes of conduct written specifically for hackathons. There are a few generic ones like the Conference Code of Conduct, but none that really cover the special conditions seen at a hackathon, such as the fact that people sleep in a relatively public space, or that the content of their hacks and demos should, like their behavior, be safe for all.

Inspired by The Hack Day Manifesto -- of which I’m a maintainer -- I realised that writing our own solution was probably the best way to go, and so the Hack Code of Conduct was born. While the manifesto exists as a static website, I decided to turn the HackCoC into a proper web app to allow any event organiser to customise. This also permits any hackathon organiser to specify a designated point of contact when the HackCoC is breached. I hadn’t seen this on any other codes of conduct and I thought of it as a valuable addition: 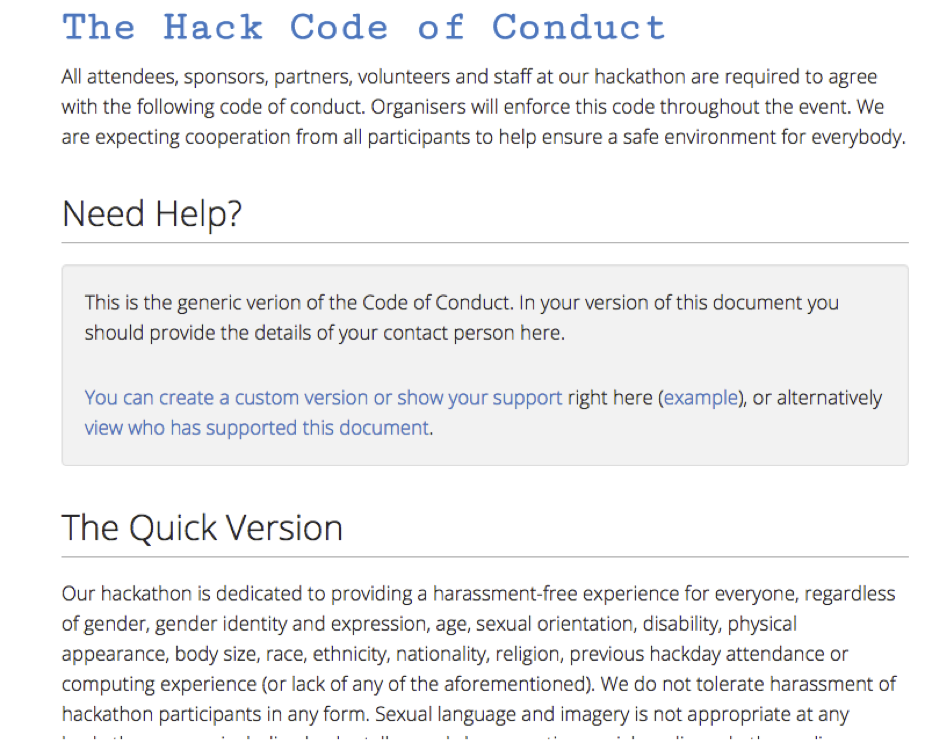 Since its launch, the response to our Hack Code of Conduct has been amazing. We’ve had over 125 thought leaders across the tech industry and hackathon scene sign their support. This includes developers and hackathon organisers from PayPal, Braintree, Venmo, Twilio, Sendgrid, Twitter, MLH, and PennApps, to name a few. We’d like to thank all of these individuals and organizations for showing their support and helping hackathons become more inclusive to everyone. 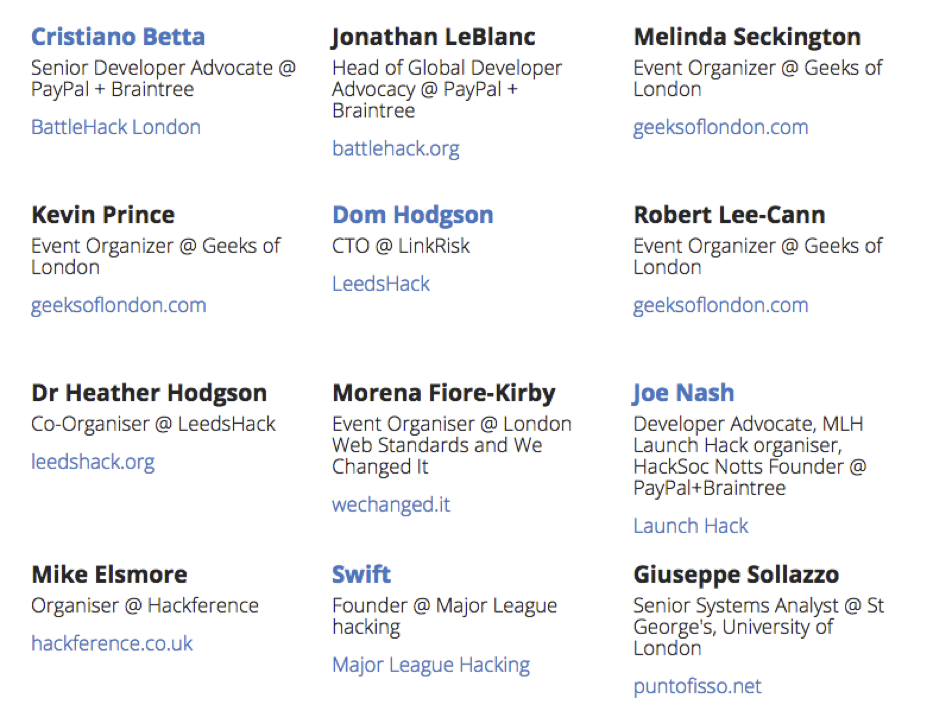 Since 2014 when we rolled out the Hack Code of Conduct for our Braintree/PayPal BattleHack series, we’ve had more than 50 hackathon organisers create custom versions of it for their events. What I really love is the collaborative nature of a project like this, as evidenced by the occasional pull requests I receive with changes to the content. This helps us as a developer/hackathon organiser community to further refine the wording and common values that our Hack Code of Conduct is committed to implementing.

I’ve seen that the Hack Code of Conduct alone is not always sufficient. It is still important as a hackathon organiser to create an atmosphere that gives people the confidence to contact you when they see or experience a violation. Without this secure environment, people might reach out to social media, or worse, say nothing at all. As a hackathon organizer, this could be frustrating and put a bad light on your event.

As with any open project, the work is never done; I have a long list of things I’d like to add: I’d like to make it easier for anyone to update their custom version. I’ve also had the text translated to some other languages with the help of our in-house translation service at PayPal. Once I add these translations to the repository, it’ll help make the Hack Code of Conduct more accessible to everyone.

If you would like to help, I invite you to do so by forking the project and adding your contribution, or reaching out to me on Twitter with any suggestions. I look forward to your thoughts and what the next year brings for this project.