Software development can be draining and often our best ideas hit us when we step away from the problem at hand. When the folks at Braintree need to blow off a little steam, we turn to the ping pong table. We have hardcore and casual players, but almost everyone in the office has enjoyed a game or two.

After the ping pong table had been around for a few months, we decided to have an office tournament. The event was a double-elimination bracket with random seeding. We all had fun, but we left feeling that we needed a more effective way to track our skill levels and provide more accurate seedings for the next tournament. We built elovation to solve this problem.

Elovation is a simple rails app that tracks the relative ratings of players in any 2 player game. Getting started with elovation is easy. Just do the following:

A ruby implementation of Elo already exists, so we built a web interface around it. 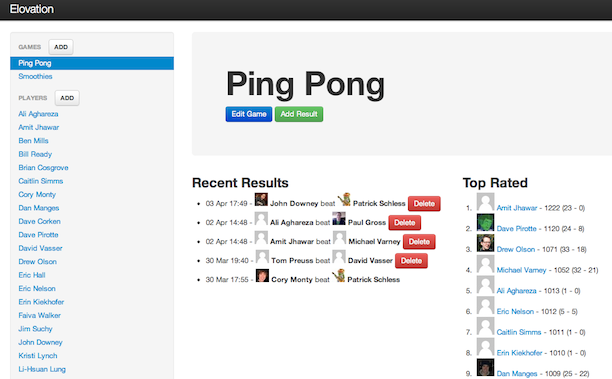 On the game page, you'll see a listing of the most recent results. On the right side, you see the players ordered by their ratings. Finally, you can click the "Add Result" button to add a new result for the game. 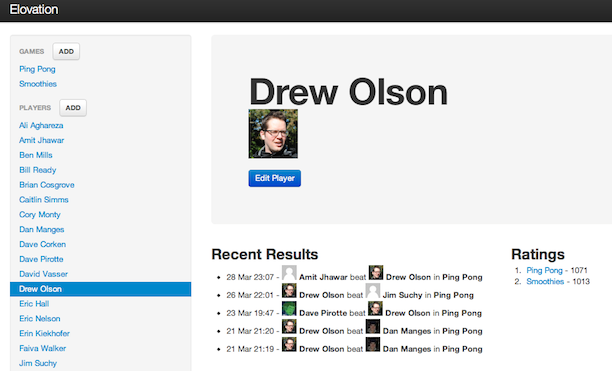 First, clone the repo and install the heroku gem.

Next, create the heroku application and push to deploy it.

Because the app doesn't provide any authentication or authorization, you can turn on basic auth by setting a few environment variables in your heroku app.

Finally, migrate the app, restart it and open it.

If you've got some ideas for making Elovation better, we want to see them. Fork the repo on github, build your feature and send us a pull request.

Most importantly: remember, ping pong is just a game.